On a windy Saturday Katie, Jacob, and Logan head north to the Keweenaw to visit waterfalls and tourist destinations alike. published on April 6, 2014 by Jacob Emerick

Katie and I decided to go on an excursion around Keweenaw County on a fine summer weekend. My recent trips had been solo adventures, complete with tough bushwhacking and long distances that held little interest to her. I convinced her to come on this trip by promising that we would stick to easy destinations and make a few tourist-y stops. We set off with Logan after a big breakfast with a full day ahead of us.

Our first destination was not a waterfall. The wind had picked up over the night and we wanted to check out the waves at McLain State Park. I drove us to the southern end to the park, near the Portage entry, and we wandered over to the back. Lake Superior was mad this morning, sending crashing waves against the breakwater and high up on the beach. After marveling over the stormy waters we continued up Veteran's Memorial Highway to Calumet, taking the long way to Five Mile Point Road.

Waves crashing against the breakwater

Silver Creek Falls was the first waterfall stop of the day. We drove past the bridge and over the creek and parked on the far side. There were a few trails that led off the road into the woods. Initially I tried to pick one close to the creek, so we wouldn't miss any drops, but downed trees and cluttered paths pushed us away into the thicker, more grounded forest. Thanks to this and the steep banks we ended up passing the falls and walking over a steep ridge before we were able to get down into the creek.

Katie near a long drop

Katie wasn't as interested in walking on the slick conglomerate creekbed and headed back to the car with Logan after a brief journey downstream. I followed Silver Creek alone, carefully picking my way over the upper drops and around the deeper pools until I reached the main waterfall. Here the creek squeezed into a narrow gorge, forcing me back up on the banks for a bit, but I was still able to get close to the drop from the downstream angle.

Looking up at the named Silver Creek Falls

While the drop was difficult to reach and view it was still a pretty little thing surrounded by dark rocks and moss. I took some time to enjoy the falls, snapping some photos over the dark pool and rocks. When I finally headed back to the car Katie was impatient to continue onwards.

Our next stop was only a hop away. Eagle River Falls is located right in the town of Eagle River just a few miles down the road. Both Katie and I had seen this waterfall before on different drives along the lakeshore so we were very familiar with the area. I parked at the small lot near the falls and we walked along the pedestrian bridge, taking photos and letting Logan enjoy the bridge's view down. I was tempted to head down the gorge to see some river-side views of the falls but decided against it, not wanting to subject Katie to another boring wait.

I had recently learned that there were two more drops along Eagle River, Ten Foot and Fenner's Falls, and that they were both a short distance upstream off of M-26. It was easy to find Ten Foot Falls, a small, blocky drop with a parking area close to Phoenix. The three of us piled out of the car for a quick walk around the trodden woods and pond below the waterfall.

Fenner's Falls proved to be more difficult to find. We tried a few spots along M-26, in between Phoenix and Eagle River, including one with a short drive and poor rock leading right to the river. We never found anything that resembled a waterfall, just little rapids, and soon gave up. I knew that Katie would not be interested in hiking along the entire stretch, even though the gorge did look pretty cool from the top, so we turned and headed further north.

Copper Falls was our next waterfall destination. I had hoped to find both the falls and old mining town even though I didn't know much about either. We found a roadside park up on the cutoff road, the one with a natural spring, and climbed the lookout tower to get views of Eagle Harbor below. It was fun with Logan, who was more than willing to climb up the stairs of the tower but not as excited about the climb back down. I had to carry the trembling puppy back to the ground, who thanked me with a wet kiss at the bottom.

Looking up the tall tower

After driving around some more I gave up on Copper Falls as well. There were a few side roads and one promising area that was marked 'No Trespassing'. I wasn't fully sure where Owl Creek even crossed under the road, as there was a few deep gorges along our drive, and didn't want to just park and bushwhack down each one. We headed up to Eagle Harbor and backtracked on M-26 to an easier destination: Jacob's Falls.

This waterfall was another familiar location. We had both been here before to check out the Jampot and the roadside falls. However, on previous visits we had never really looked at more than the lowermost drops. Today we headed up the steep path along the falls, climbing up the different cascades and plunges above the lower drop, and found numerous drops further up. The little gorge with its wide variety of waterfalls was a lot of fun to explore. Once the creek leveled out we headed back down, quite happy with how much we found at this familiar little spot.

Narrow canyon walls around the creek 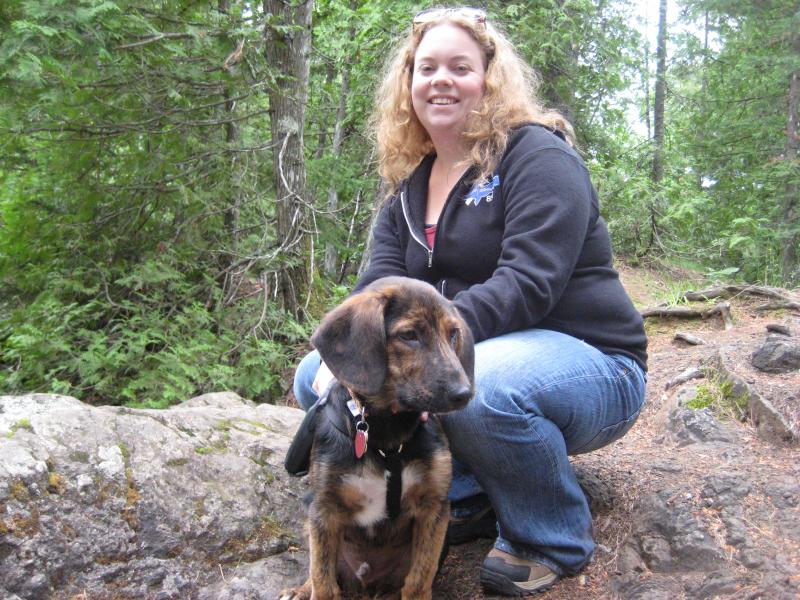 It was well past time to eat lunch. We stopped at Great Sand Bay for an in-car picnic. We had hoped to walk down to the beach and eat on the shoreline, but the strong winds roaring over Lake Superior kept us in the car. We kept content just watching the waves crash below us, eating our sandwiches. Logan ignored his dog food until our lunch was gone, begging for scraps. Once all three of us had eaten something we drove to Eagle Harbor and stopped at the lighthouse. We had forgotten about the cash-only tour (and, with a puppy, it didn't make sense to keep him in the car for that long anyways) and only visited the little walk over the rocks.

There were still more waterfalls to visit today. Up the road from Eagle Harbor, along the lakeshore stretch of M-26, the Silver River flows under a striking sandstone bridge and over a set of falls. We parked here, headed down the stairs, and stumbled right onto the upper drops. They weren't tall or dramatic, just a set of small stacked steps, though the bridge in the background made for a pretty scene.

Continuing down the well-trod paths took us to the lower drops, which were just out of sight from the road. The lower half was over basalt. There are many creeks and rivers in the Keweenaw that flow over a mixture of conglomerate and volcanic rocks, thanks to the area's rough geologic history, but to see such a quick transition of rock layers here was a real surprise.

The trail appeared to continue downstream, perhaps leading all the way to the lake. We turned back to the car. There was a big destination ahead of us. Out on the tip of the Keweenaw is a couple of really interesting locations, including the Keweenaw Rocket Range, High Rock, Schlatter Lake, and views of Manitou Island. We headed up through Copper Harbor, past Fort Wilkins, to the end of US-41 itself. The Mandan Road continues east from here so we followed it, bouncing around on the rough gravel.

After several miles we began to talk about turning around. I did not have a map, hoping that this area would be easier to navigate, and the rough condition of the road had kept us below twenty miles an hour after leaving 41. None of us were enjoying the ride at all, and, after passing numerous turn offs and not knowing which was which I gave up and turned around. I learned later that we had indeed passed by the tracks to High Rock and that they were in fairly rough shape that summer.

We circled back to Copper Harbor and stopped at a store for some directions. I knew that Manganese Falls were located somewhere south of town… Somewhere. After wandering for close to an hour on the Mandan we didn't feel like taking chances. We got some pointers and headed past the Pines Resort and a bible camp to some parking spots near French Annie Creek.

There was a wooden viewing platform that let you look down into the gorge, to the crest of the waterfalls. I wasn't content with the limited view. Alone I headed downstream along some trails to a lower bridge over the creek and followed the creek back upstream. Here I was also disappointed, as the narrow gorge and boulders blocked the view as well. Manganese Falls is a tall, pretty waterfall, it's just hard to see.

It was time to head back to Houghton. I had a bowling league that evening, and while Katie didn't bowl, we both enjoyed hanging out at the lanes for the weekly event. The trip was a fun one even if we missed out on a few destinations. We didn't find Fenner's or Copper Falls and completely gave up on the Mandan Loop. Still, after spending a full day north of the Portage with Katie and Logan and making it to six waterfalls I didn't have much to complain about.

Some of my Sites